Thank you for all those who participated in the first migraine associated vertigo survey, in total 243 took part. The sample is still open, so if there are other groups you are aware of, they can still complete it (and I will happily update results if they change substantially).

As a preamble, let me discuss the limitations of the results and re-iterate what I have replied to several queries about already.

Firstly, this was essentially a pilot study – one to test out ideas and give fuel to further questions and hypotheses. I did not log IP addresses, I did not firmly diagnose each and every patient and I did not check that responses of medications taken were truthful.

Further, the sample of patients who took part would not be entirely typical for a single practice. I suspect that many patients who are treated and respond and are well controlled are less likely to join an online forum so I would expect response rates to treatment to be lower and symptom duration to be longer.

Finally, the patient selection to complete the survey was firstly online, secondly via a focussed Facebook group (meaning that it was not a random sample of the population nor was it medically selected but rather self-selected) and thirdly anonymous, therefore being certain of the validity of the data is difficult, but as mentioned above, it is useful for hypothesis generation.

Nevertheless, I feel it is a good start to see what symptoms and treatments the group is being given and see if there is something we could be doing differently in both diagnosis and treatment.

Without further ado, therefore, let me share some of the results of the survey, which will remain open but responses have slowed sufficiently to make the numbers relatively stable.

A total of 243 patients completed the survey.

Not overly surprising, the majority were women, but the ratio was higher than what one would expect for migraine: typically, before age 12 years, migraine is more common in boys than in girls. After puberty, it is increasingly more common in women, with a ratio of about 2:1 at age 20 years (2 female for every 1 male patient), peaking to 3.3:1 between 42 and 44 years, and decreasing to 2.5:1 by 70 years (1,2).

In contrast to this, the ratio of women to men completing the survey was over 8:1.

In terms of age group, given this is a Facebook online group and that migraine peaks in the 30-49 age bracket, as one article from the Lancet Neurology showed (3):

Similarly, the age spread of the survey was around the same peak:

In terms of the symptoms of vertigo and imbalance, the current criteria for diagnosis mention the following vestibular symptoms, which must be of moderate or severe intensity:

– External vertigo, a false sensation that the visual surround is spinning or flowing

• Positional vertigo, occurring after a change of head position

• Head motion-induced dizziness with nausea. Dizziness is characterized by a sensation of disturbed spatial orientation. Other forms of dizziness are currently not included in the classification of vestibular migraine.

Surprisingly, over half reported ear symptoms (ringing in the ears – tinnitus – or fullness of the ears) which are not seen as typical of the diagnosis and more suggestive of an inner ear cause (note suggestive, not diagnostic).

Description of symptoms in the survey: 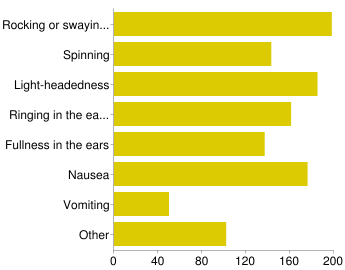 Exacerbating factors – those that worsen the symptoms, included;

In terms of associated headaches, around a quarter had only minor headaches, but I note that nearly 80% felt worse with bright lights, again suggesting that a large number had symptoms suggestive of migraine: 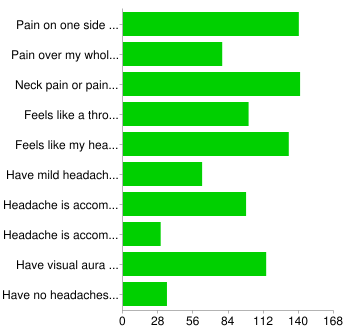 I will soon collate the medications and other associated problems (co-morbidities) and compare them to existing literature.